In the context of Belfast Tourism Titanic Quarter is a trendy new area in the ever popular city with a rapidly growing tourist attraction, Titanic Belfast .

This area of Belfast has seen a rapid development in recent years and this impressive building is situated at the heart of places to visit in Belfast.

Titanic Belfast really is a 'must see' visit in any tour of the city and northern Ireland. Housed in an iconic, six-floor building, it is located in the heart of Belfast, right beside the historic site of the titanic construction. 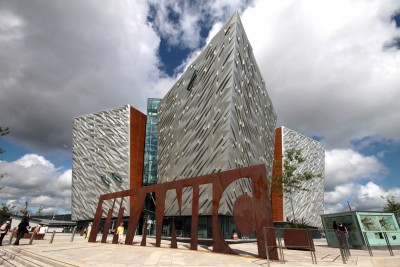 Although there are 187 Titanic museums around the world,  Belfast city only woke up to the tourism potential of the great liner in the wake of the James Cameron film - just in time for the centenary of the sinking in April 2012.

This Titanic Museum in memory of the Titanic Ship has become the most popular tourist attraction in Northern Ireland and one of the top places to visit in Ireland, having welcomed more than 650,000 visitors through its doors between opening on 31 March 2012 and the end of 2012.

As you walk through the doors of the attraction you will be introduced to the building’s giant atrium surrounded by the four ‘ships’, hull shaped wings which house the beginning of the Titanic experience. Your journey takes you through nine galleries of this state-of-the-art visitor experience telling the story of the Titanic Ship , from its conception in the early 1900s, through the Titanic construction and launch, to its famous maiden voyage and tragic end.

The story is brought up to the present with the discovery of the wreck and into the future with live links to contemporary undersea exploration.The Titanic Exhibition is located 100 yards in front of where the Titanic ship was built; to the right side is the drawing office where she was designed and to the left is the River Lagan where she first set sail.

[?]Subscribe To This Site
uniquely-northern-ireland [Titanic ] Return to top