She was among those that were picked up by the ship Carpathia less than two hours after the sinking of the Titanic.

Those that did not survive were 1,517 . Those rescued were just 706. The first class list of Titanic Survivors is here and you can also review the second and third class  survivors of the Titanic.

Another ship, the California ship arrived about two hours later but all survivors of the Titanic had been picked already by the Carpathia. The Carpathia set sail for New York arriving there on Thursday, April 18 while the California stayed on a little longer in case there were more survivors, but found none. 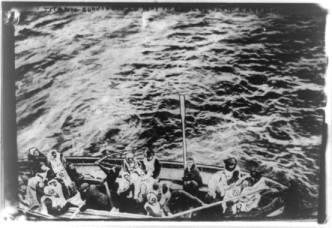 Titanic Facts and Survivors of the Titanic By Class

The Titanic survivors were much higher among the first and second class than among the third class and the crew.

Most of the passengers on the Titanic who died, did so from the cold. The water temperature was at around freezing point or just below. In such water temperatures a person can die in as little as 15 minutes .

Others died from falling objects especially when the stern rose high in the air, the forward funnel broke off and fell in the water, and eventually when the ship broke in two and the stern fell with great power on the water.

Some from the Titanic ship disaster wrote books so that the world would never forget Titanic or her last night.

The first books came from Archibald Gracie, who died before “The Truth About the Titanic” was published, and second class passenger Lawrence Beesley, who in “The Loss of the Titanic” wrote that:

“No living person should seek to dwell in thought for one moment on such a disaster except in the endeavour to glean from it knowledge that will be of profit to the whole world in the future. When such knowledge is practically applied in the construction, equipment and navigation of passenger steamers – and not until then – will be the time to cease to think of the Titanic disaster and of the hundreds of men and women so needlessly sacrificed.”

Top to The Titanic Survivors

[?]Subscribe To This Site
[uniquely-northern-ireland] [Titanic] [Survivors] Return to top