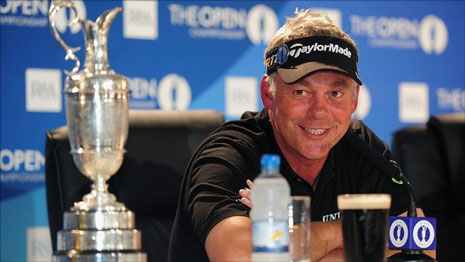 He has won 22 tournaments worldwide on a number of golf's main tours including the European Tour, the PGA Tour, the Sunshine Tour and the Japan Golf Tour. His biggest victory came very recently when he won the 2011 Open Championship at Royal St George's in England, his first major win. We were all glued to the TV cheering him on. He was even running the golf ball over the sand in the bunkers the last few holes! -An amazing day.

One of the world’s most well known Irish golfers, Darren Clarke has won many fans with his passionate play and dedicated approach to the game.

In the 1999 Smurfit European Open he became the first player on The European Tour to shoot 60 for a second time, having achieved it first in the 1992 European Monte Carlo Open.

Darren was picked as one of the wild cards for The Ryder Cup at K Club and in an emotionally charged week produced one of his most memorable performances, winning all three of his matches.

A dedicated worker for charity, he set up his own Darren Clarke Foundation, which not only helps further the development of junior golf in Ireland, but also now raises money for Breast Cancer Awareness.

Darren has assured his place in history by earning a place in the renowned ‘Who’s Who’ guide for 2008. 2008 was a great year for Darren with wins in the BMW Asian Open in China and the KLM Open.

In 2010 he beat a world class field in the JP McManus Invitational Pro-Am at Adare Manor in Ireland where he had a one shot victory over Luke Donald. He secured his spot in the 139th Open Championship at St Andrews by finishing 2nd in the Barclays Scottish Open. Darren finished 30th in the European Tour Race To Dubai assuring his place in the field for the 2011 Open Championship at Royal St Georges.

2011 began well for Darren with a victory in the Iberdrola Open in Mallorca but he enjoyed his finest hour in July 2011 when he became another of our Irish golfers who claimed his maiden major championship at Royal St George's in Kent by three shots from Phil Mickelson and Dustin Johnson.