To its east is the larger island of Great Britain, from which it is separated by the Irish Sea.

To add to this is you are planning any trips to Ireland many people also just talk generally about travel in Ireland whether it is to the north of Ireland, south of Ireland, west of Ireland and east of Ireland.

Another way we talk about Ireland is in terms of provinces -there are 4.  Now let us take a look at both the counties of Ireland and the provinces where you may be playing your golf. 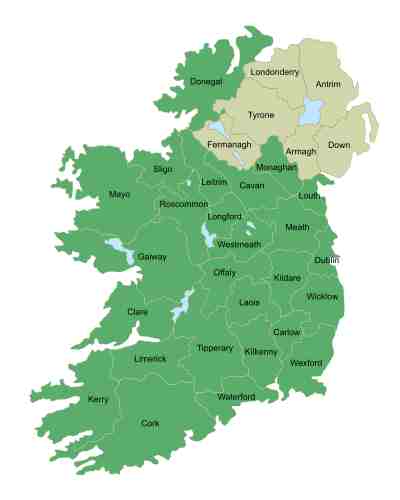 There are 32 counties in Ireland.

12 in the province of Leinster:

9 in the province of Ulster:

6 in the province of Munster:

5 in the province of Connacht:

Ireland culture has had a significant influence on other cultures, especially in the fields of literature-see some of our poetry or quotes by some of our famous writers and poets at our inspirational life quotes.

We also have unique to Ireland popular parts of our culture through Gaelic games, Irish music, and the Irish language.

Ireland culture also has many features shared with Great Britain, including the English language, sports such as football, rugby, horse racing and of course golf. Check out golf locator for northern Ireland counties here.

[?]Subscribe To This Site
[uniquely-northern-ireland] [Golf] [Where?] Return to top