Looking at Ireland-Golf-Packages-What sort of courses have we got here in Ireland and what type of golf courses should you expect to play if you are arranging golf travel packages to Ireland?

Well if you are coming from abroad on an Irish golf holiday to play Ireland golf courses we have one treasure of a course that you will look forward to and it is part of the Ireland landscapes that have something unique, a type of golf course you simply won't find in many other parts of the world.

One of the more famous links courses are found in Royal Portrush in the north of Ireland golf. This was where the recent Irish Open golf championship was held. This is one of great golf courses of Ireland and the world. 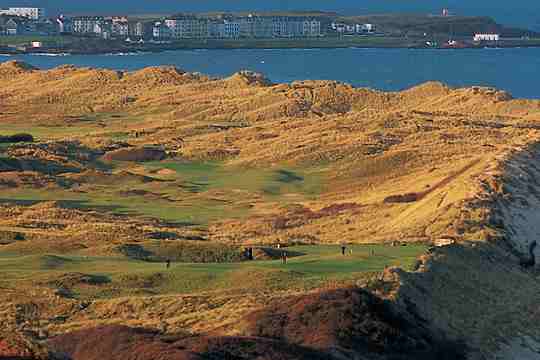 The Links Golf Course and links golf in Ireland

It's a golf course that's next to the ocean, grass-covered sand dunes, high rough, undulating slopes, deep valleys, and as it is on  the coastline very spectacular views of the cliffs and sea.

The Links golf courses evolved formed by the wind, water, and shifting sands.

Links land is where the game of golf began . It is a completely different game of golf and requires imagination and vision in testing conditions-but the best golf by a long shot.

Tom Watson fell in love with the links golf game from the moment he made his first trip and said it wasn't until he had been over here several times that it occurred to him that this was golf, the way the game was meant to be played."

Tiger Woods goes to Ireland before the British Open where he can play the world's best links.

But here's the amazing thing about Ireland's golf links courses -you don't have to be a golf pro or country club member to get onto the best courses. That's because every course is open to the public. The average round in Ireland will take you less than four hours

When I go to arrange Ireland-Golf-Packages-What Links Golf Courses in northern Ireland would be recommended?

Three courses stand out that would find their way into most people's top 5 in Ireland golf courses and also commonly featured in the world's top ten golf courses :

The Slieve Donard peak casts its shadow over the course and from many of the holes golfers are treated to some dramatic views that may make concentrating on the task in hand a tough proposition!

The Dunluce Course has been battling it out with Royal County Down for the title of Northern Ireland’s best golf course for years and it seems as if the debate is set to continue for many more.

Ardglass is one of Northern Ireland’s best kept secrets and is without doubt one of the most visually attractive links courses in the world.

[?]Subscribe To This Site
[uniquely-northern-ireland] [Golf] [What Courses] Return to top