The Titanic Facts on Titanic sinking on its maiden voyage show it losing at least 1,517 lives and made it one of the most heartbreaking maritime disasters in history.

The history of the Titanic is tinged with such sadness with the tragedy and loss of human life and now over 100 years old the story continues to be read with such great interest.

This short summary tells the story of the Titanic timeline after it set out on its journey to America.
It describes the ice warnings received during the day. It answers the often asked questions when did the titanic sink and how did the titanic sink? 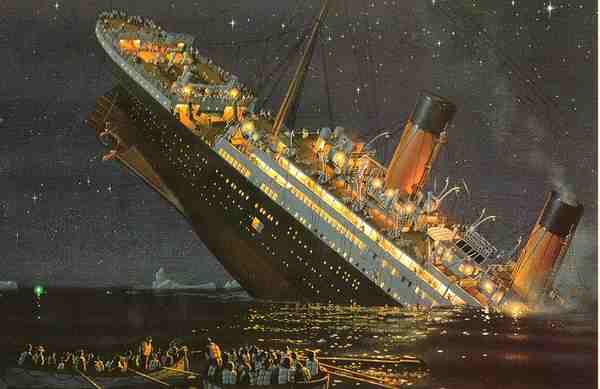 The first two days across the Atlantic, April 12-13, 1912, went smoothly. Sunday, April 14, 1912 also started out relatively uneventful, but later the tragic event of the Titanic iceberg hit and the Titanic sinking unfolded.

Throughout the day on April 14, the Titanic ship received a number of wireless messages from other ships warning about icebergs along their path. However, for various reasons, not all of these warnings made it to the bridge.

Captain Edward J. Smith, unaware of how serious the warnings had become, retired to his room for the night at 9:20 p.m. At that time, the lookouts had been told to be a bit more diligent in their observations, but the Titanic ship was still steaming full speed ahead.

At 11:40 p.m., the lookouts rang the bell to issue a warning and used a phone to call the bridge. First Officer Murdoch ordered "hard a-starboard" (sharp left turn). He also ordered the engine room to put the engines in reverse. The RMS Titanic ship did bank left, but it wasn't quite enough.

Captain Smith, however, knew that something was very wrong once the Titanic iceberg hit happened and went back to the bridge.

After taking a survey of the ship, Captain Smith realized that the ship was taking on a lot of water. Upon the realization that the RMS Titanic sinking was happening, Captain Smith ordered the Titanic lifeboats to be uncovered (12:05 a.m.) and for the wireless operators on board to begin sending distress calls (12:10 a.m.).

At first, many of the passengers on the Titanic did not comprehend the severity of the sinking Titanic ship. It was a cold night and the Titanic Ship still seemed like a safe place, so many people were not ready to get into the Titanic lifeboats when the first one launched at 12:45 a.m.

As it became increasingly obvious that the RMS Titanic was sinking, the rush to get on a lifeboat became desperate. Women and children were to board the lifeboats first.

There were not enough Titanic lifeboats to save everyone. During the design process it had been decided to place only 16 standard lifeboats and four collapsible lifeboats on the Titanic Ship because any more would have cluttered the deck. Titanic Facts show if the 20 lifeboats that were on the Titanic Ship had been properly filled, which they were not, 1,178 could have been saved (i.e. just over half of those on board).

Once the last Titanic lifeboat was lowered at 2:05 a.m. on April 15, 1912, those remaining on board the sinking Titanic ship reacted in different ways. Some grabbed any object that might float (like deck chairs), threw the object overboard, and then jumped in after it.

Others stayed on board because they were stuck within the Titanic ship or had determined to die with dignity. The water was freezing, so anyone stuck in the water for more than a couple of minutes, froze to death.

Titanic Facts on Titanic Sinking:
Titanic Rescue and the Survivors of the Titanic

Although several ships received the Titanic's distress calls and changed their course to go help, it was the Carpathia that was the first to arrive, seen by survivors in the Titanic lifeboats around 3:30 a.m. The first survivor stepped aboard the Carpathia at 4:10 a.m. and for the next four hours, the rest of the survivors boarded the Carpathia.

Once all the survivors were on board, the Carpathia headed to New York, arriving in the evening of April 18, 1912. In all, history facts about Titanic show a total of 706 people were rescued while 1,517 perished.

Return to The Titanic Facts Home

[?]Subscribe To This Site
[uniquely-northern-ireland] [Titanic] [Sinking] Return to top